With Canon 5D Mark 3 Camera, I tried to shoot some video experiment but failed due to the same battery issue with this video. Since I realized the issue, I divided my experiment to two parts: one is trying different settings with photo shoots and the other is taking a video with iPhone to test speed.

A gummy bear and a plastic(?) dinosaur. Both room and oven lights were used and the oven door was almost always open. Both the gummy bear and the dinosaur melted quickly with low heat.

Three fish jellies. Both room light and oven light were on in the beginning but later only shot with the oven light. Also, took some shots outside of the oven. Didn't melt quickly and required high heat - it boiled rather than melting.

One ghost-shaped marshmallow. Similar with the fish jellies, it couldn't stand stable while melting and fell into flat side. Only oven light was used. The object's size was much more satisfying than the other two examples. The oven door was first closed in the beginning and opened in later parts.

This is a storyboard for the video project with Simon Jensen and Nathier Fernandez. The surrounding background starts from mundane indoor environment and zooms in to two different objects. Object 1, is something that melts inside a microwave or an oven; Object 2 is a land with mini figures inside a water container. As the Object 1 starts melting, Object 2 is drowned by falling water. After both of the objects are destroyed, the invented product comes out and ends the video.

This is a soundwalk project done with Elizabeth Ferguson and Amena Hayat. It interprets commuting process as a journey towards home. After bringing different stories from each hometown, the sound ends with NYC as its background - which is our current home.

The Ecstasy of Influence: A Plagiarism

Nowadays people live in an environment that overflows with information. When Jonathan Lethem mentions an example of John Donne’s quotation that even himself confused what line to search in web and typed “all mankind is of one volume” instead of “all mankind is of one author, and is one volume” I found many similar examples in my life and agreed how internet is often a gigantic swamp of unorganized information. Nevertheless, I still believe that web searching environment will someday overcome these problems and evolve to a better kind of source. The history of web searching is enormously short compared to the one of physical library and printed materials. Great thing about internet is that anyone can be “one author” and put his or her ideas. He mentions about how the phrase “every chapter must be so translated” was on internet simply because someone who loves Donne had posted it on his homepage. In contrast, it means that anyone can post anything and those uploads will be open to the public - even one’s personal love towards a poet.

A term “open source” has strong connection with programming to me, and I was amazed a similar culture started back from blues and jazz musicians. As he proceeds his conversation about copyright, it eventually led me to think about patent law and intellectual property right. It’s especially an important topic as brands and identity systems gain more and more significant value to major corporations than the past. However, a producer in any kind of creative area should always give credit when using others’ work, not only because of profit and fame but because it’s the expression of respect towards the original author’s labor and creativity. A plagiarism is an act that discourages both the producer’s creativity and the whole creative production society.

Kirby Ferguson’s presentation also includes the reference of Bob Dylan. Especially the example of how Bob Dylan’s lyric for Don’t Think Twice, It’s Aright with a traditional song Who’s Gonna Buy You Ribbons performed by Paul Clayton reminded me how Jonathan Lethem was unconsciously typing a wrong line of quote of John Donne. A plagiarism, or a “remix” rather happens unconsciously than intentionally. One of the famous S.Korean singers said, only the producer himself or herself truly knows it was an intentional plagiarism. On the other hand, it’s also a reason why I believe any process of creative producing should involve some background research about its concept - to find out what are the similar examples and to bring back a possible “unconscious” plagiarism to a proper remix.

Kirby Ferguson says that creative works are “a property that we’re all building on…creations can only take root and grow when’s that ground is prepared” and it again leads back to the conclusion I made in the previous reading. Act of plagiarism is toxic because it kills “the ground” for creative works to grow and undermines morale of producers - which ultimately makes “a property that we’re all building on” to collapse. Using others’ work as reference and “remix” accelerate the process of creating, but there is a difference between referencing and simply killing “the ground.” In another word, the title of this lecture “Embrace the Remix” doesn’t literally mean to tolerate plagiarism, but is interpreted as honestly embracing the fact that you’re influenced by others.

Through the audio journey Her long black Hair in Central Park, I've realized that sound can displace and bring me into different places and time. In a group of Elizabeth, Amena, and I, we start thinking about various possibilities for creating a new audio journey and decided to map our commutes to 721 Broadway and transform it to a sound walk inside the building. The first step was to collect sounds while each of us commutes - focusing on the variety created by NYC's different locations, people, and transit.

Her long black hair is an audio journey created by an artist, Janet Cardiff. The journey takes place in Central Park, around the time of 2004~2005. During her talk and navigation, she often asks the audience to see those accompanying photographs - which includes some scenes around Central Park and images of a mysterious woman with "long black hair."

The description about Central Park in 2005 sounded not much different from the one in 2017; time moves relatively slower in certain places. Many sceneries she portrays via sound dissolve amazingly well with the present experience. The sound of people passing by, hoofbeats, and images of a man reading newspaper, kids and strollers around the zoo, food trucks under umbrellas, and even those people who take wedding shots - these are just several examples found in the sound-walk that completely emerged with reality I've experienced. 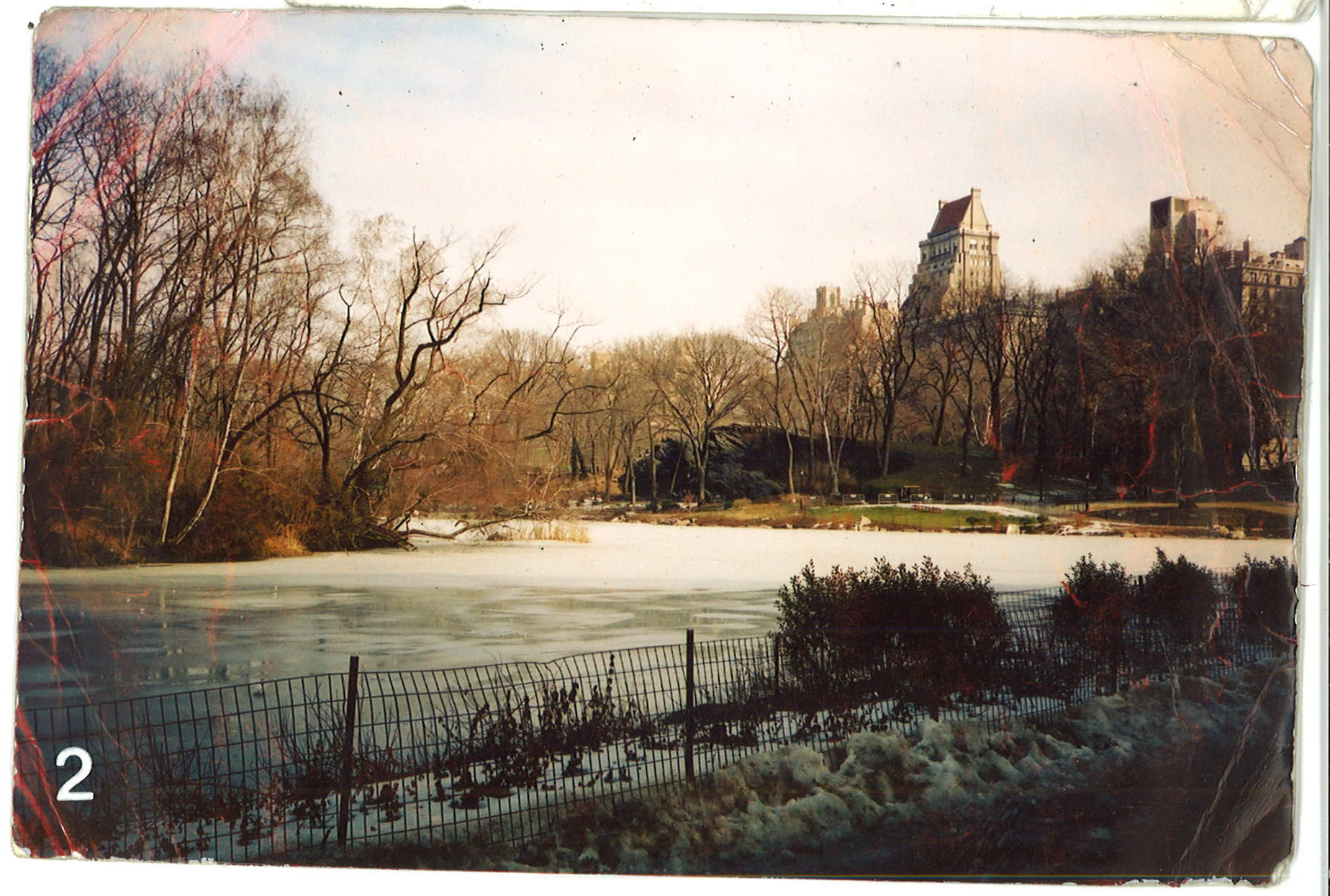 On another hand, it was also easy for me to be misled by things that only existed in soundtracks. Sometimes there was no one near me, although I constantly looked around due to the spacious effect that soundtracks were creating. It reminded me how powerful the auditory effect is. 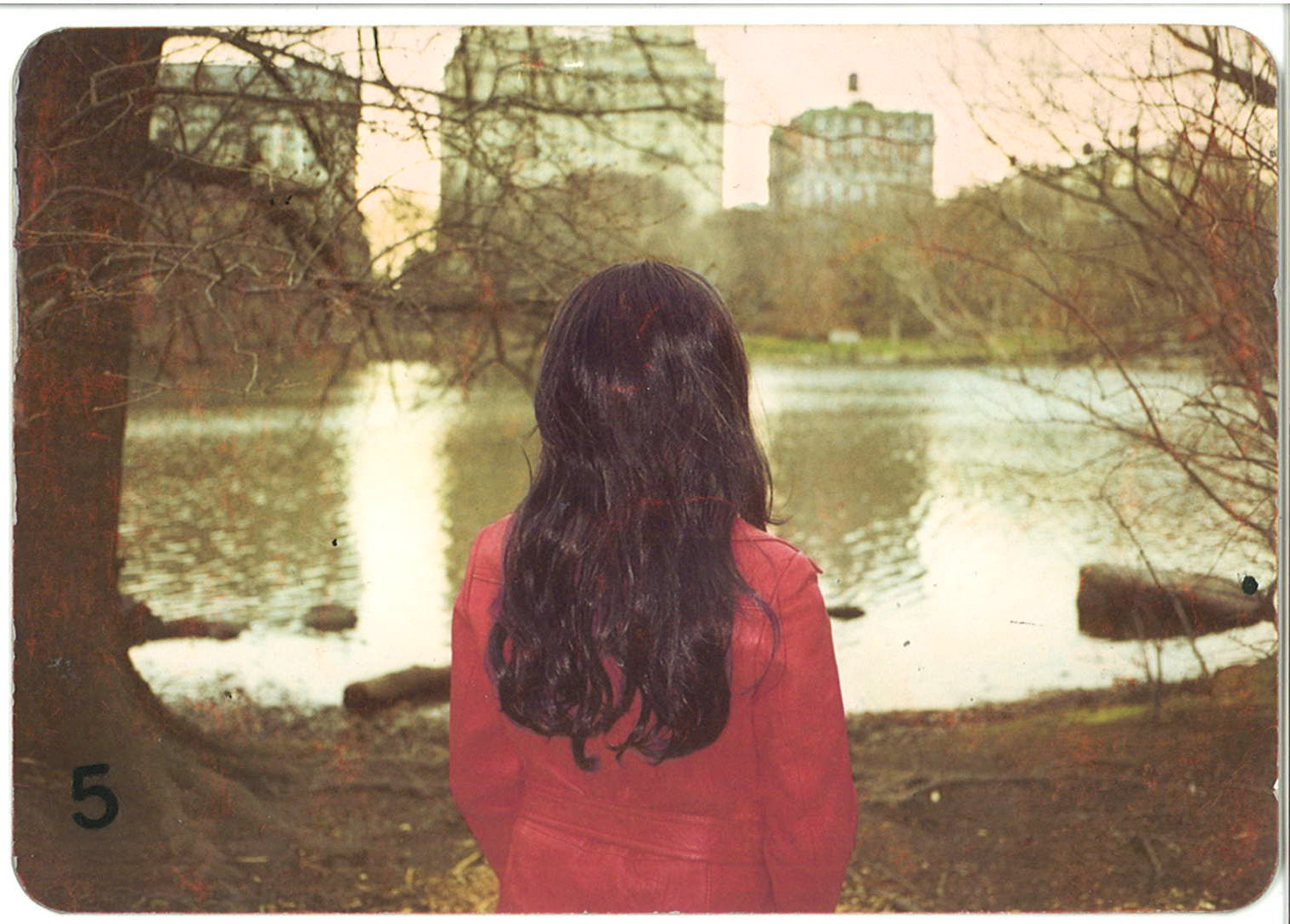 As Janet continues to describe her surroundings as well as presenting the archived photographs, there is an interesting chained/framed structure of past and present. The oldest time is, inside the photographs; because at the time Janet was walking in Central Park, those photos are already in the past. The relatively recent past is when Janet is breathing inside soundtrack. The present is the moments I spent today in Central Park with the soundtracks and photos. 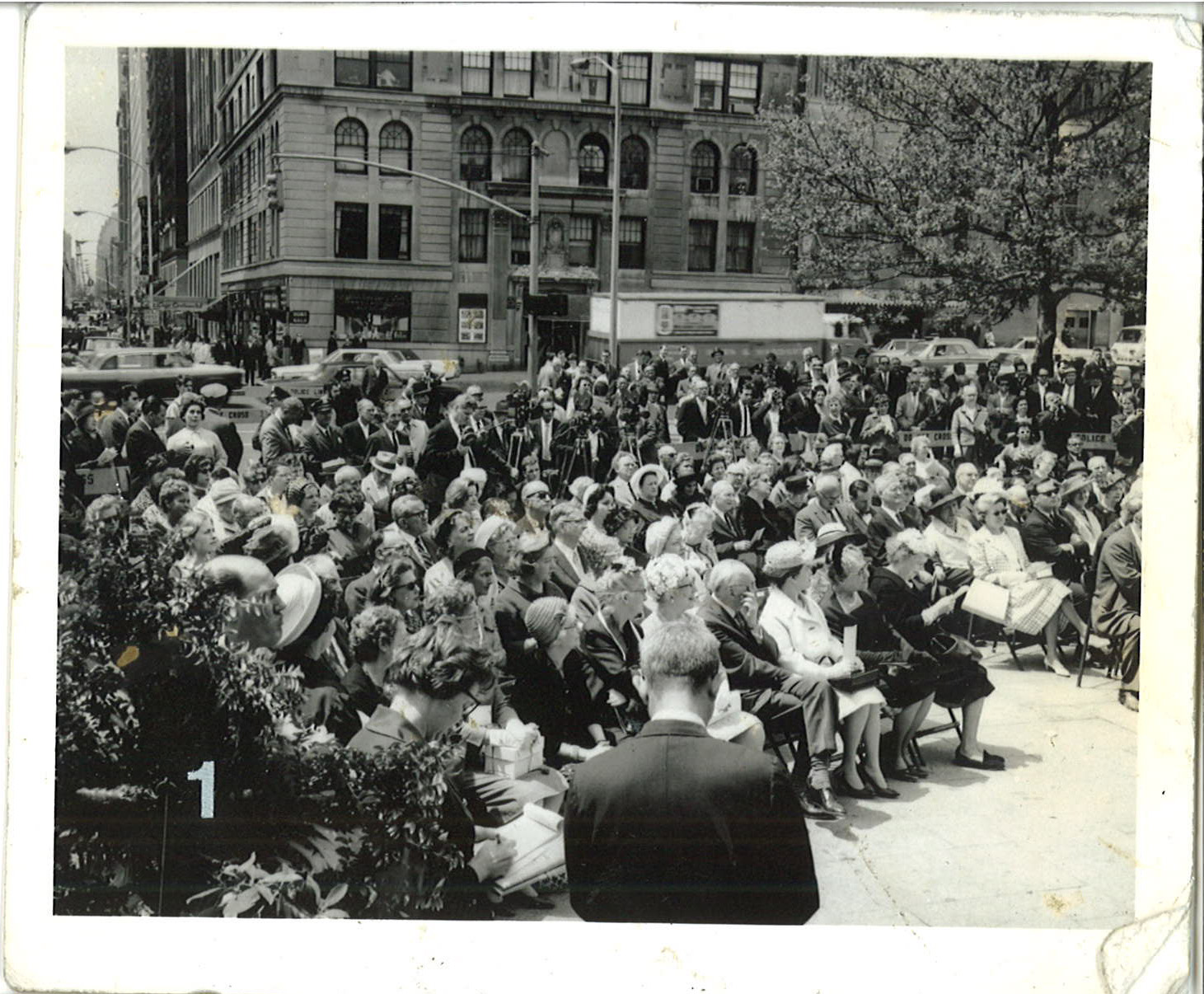 These diverse stories of encountered people, the myth of Orpheus and Eurydice, and an unknown woman in the photo seem to be randomly placed throughout the journey. However, keeping in mind the chain structure of past and present that I've mentioned, one can easily notice that the common theme that embraces this whole sound journey is "time." It becomes apparent by such moments when a man gets reminded of his mother through the photograph, a person asked Janet to take photo on the bridge, and a couple taking wedding shots. All the figures involved in the soundtrack including Janet and myself, either try to keep the present through photos and recording, or try to grab past from the already taken photos or recorded soundtracks. 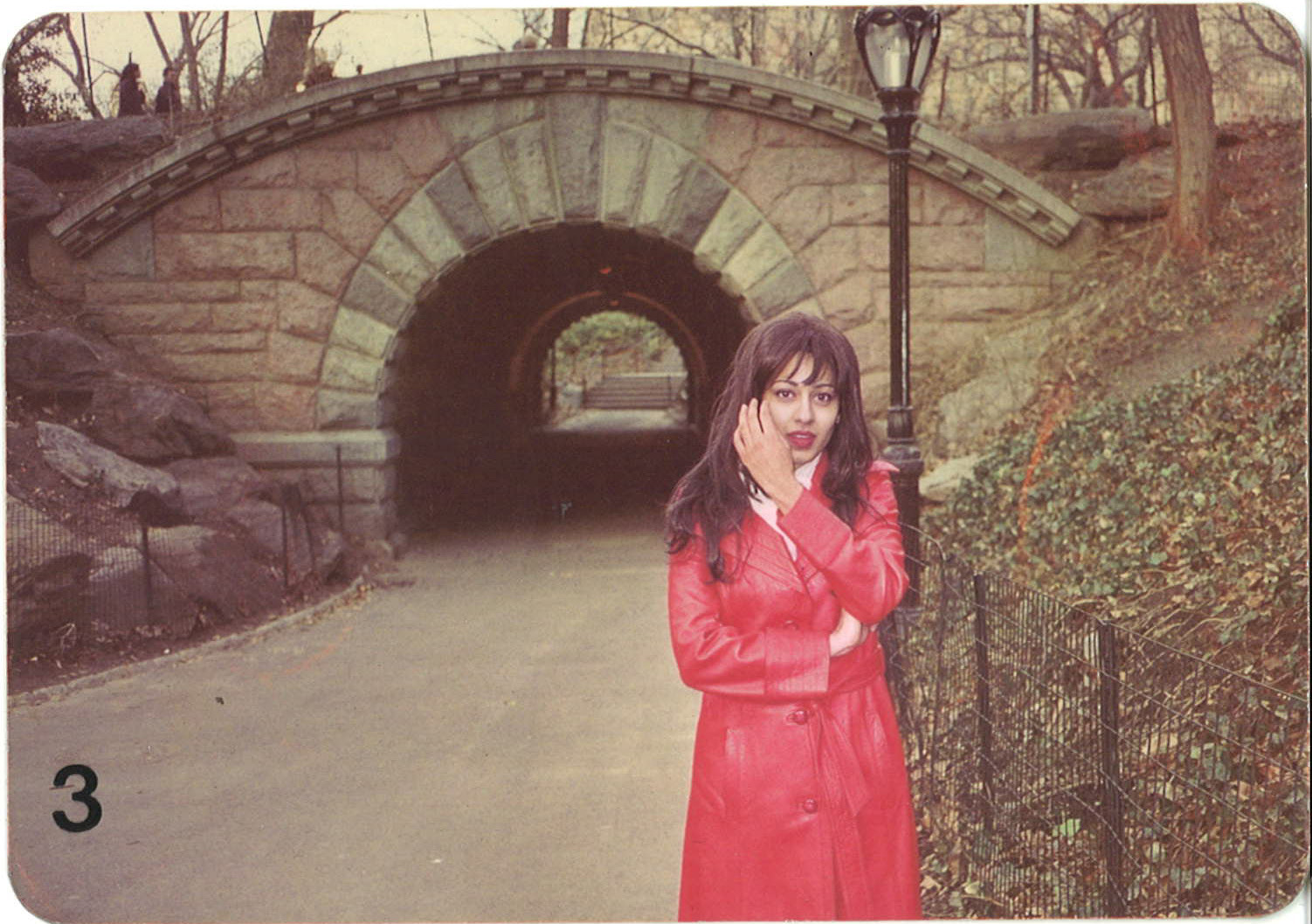 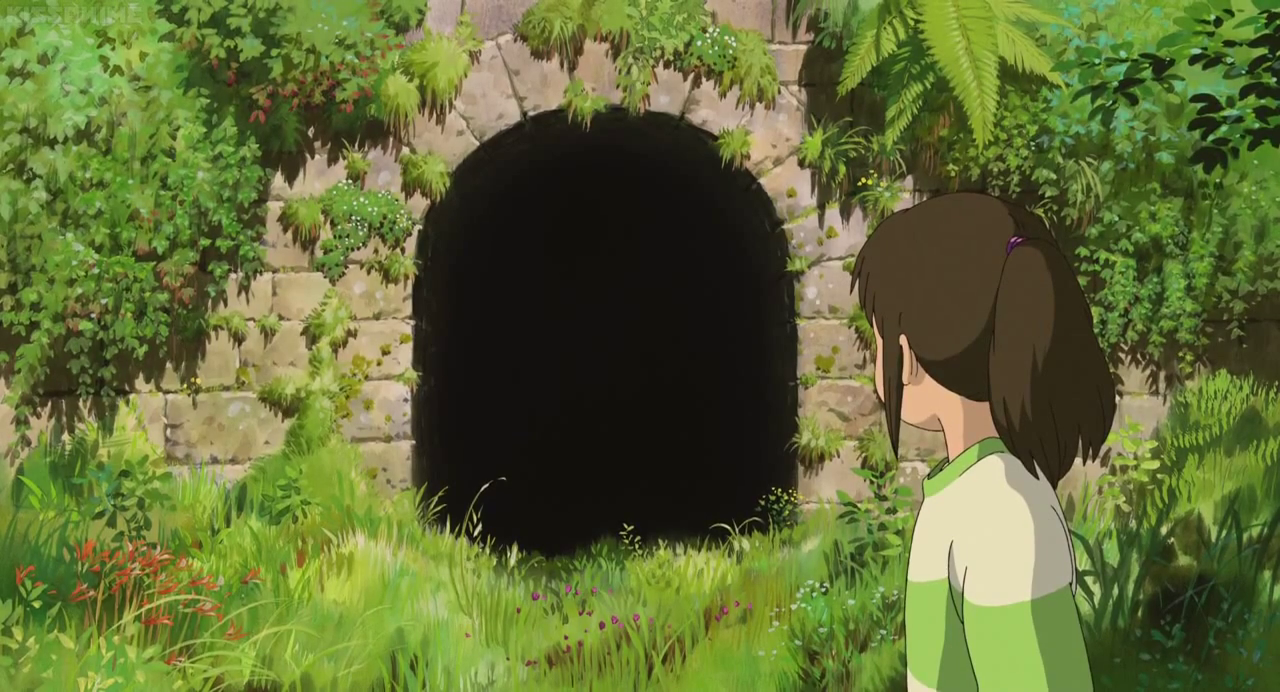 She specifically emphasizes the last photo, of the woman's appearance from behind - building further connection with Orpheus and Eurydice story. There are many myths and stories that contain similar consequences; a Japanese myth about Izanagi and Izanami and the Biblical story of Lot's wife are some of the examples. The numerous tunnels in Central Park especially reminded me the ending of Spirited Away. At the last part of Spirited Away, Sen successfully escapes her fantasy world by going through the tunnel without looking back as she was told to. When she comes out, her calm face expression rather suggests that she lost her memory prior to passing the tunnel. Friedrich Nietzsche said "Blessed are the forgetful.." yet people won't stop their effort to remember and hold past to the present.